Launch of the CELESTA and MTCUBE-2 nanosatellites

Launch of the CELESTA and MTCUBE-2 nanosatellites

Its mission was to put the LARES 2 satellite and six nanosatellites into orbit, including two CubeSats from the University Space Center of Montpellier (CSUM). First one, MTCUBE-2, was produced by CSUM in partnership with LIRMM and funded by the Van Allen Foundation and its donors (including 3D PLUS). The second, CELESTA, was produced by CSUM in collaboration with CERN.

The two nanosatellites sent their first signals on July 13 around 5 p.m. and which were picked up by ham radio operators around the world who confirm that the satellites are transmitting. “It is difficult to find the signal emitted by a 10cm-wide satellite 6000km from the earth” indicates Professor Laurent Dusseau, Director of the CSUM and the Van Allen Foundation. Ham radio operators, with all their know-how, are a major asset in achieving this and we thank them”.

The CELESTA and MTCUBE-2 university projects have an educational objective to involve students as much as possible in all aspects of the development and operation of a 1U CubeSat project (engineering, product assurance, management and sustainability). Their second objective is scientific in nature.

CELESTA’s mission is to compare the radiative environment in MEO orbit and the one produced in the CHARM irradiation chamber. The satellite payload includes a “RadMon” radiation monitor and a Single Event Latch-up (SEL) experiment, both developed by CERN through several doctoral programs.

MTCUBE-2’s mission is to measure the effects of radiation on different types of electronic memories in space. The payload will test the Single Event Effect (SEE) sensitivity of various memory technologies. 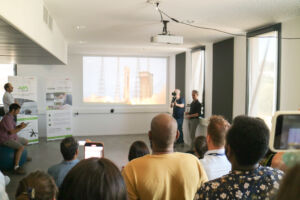